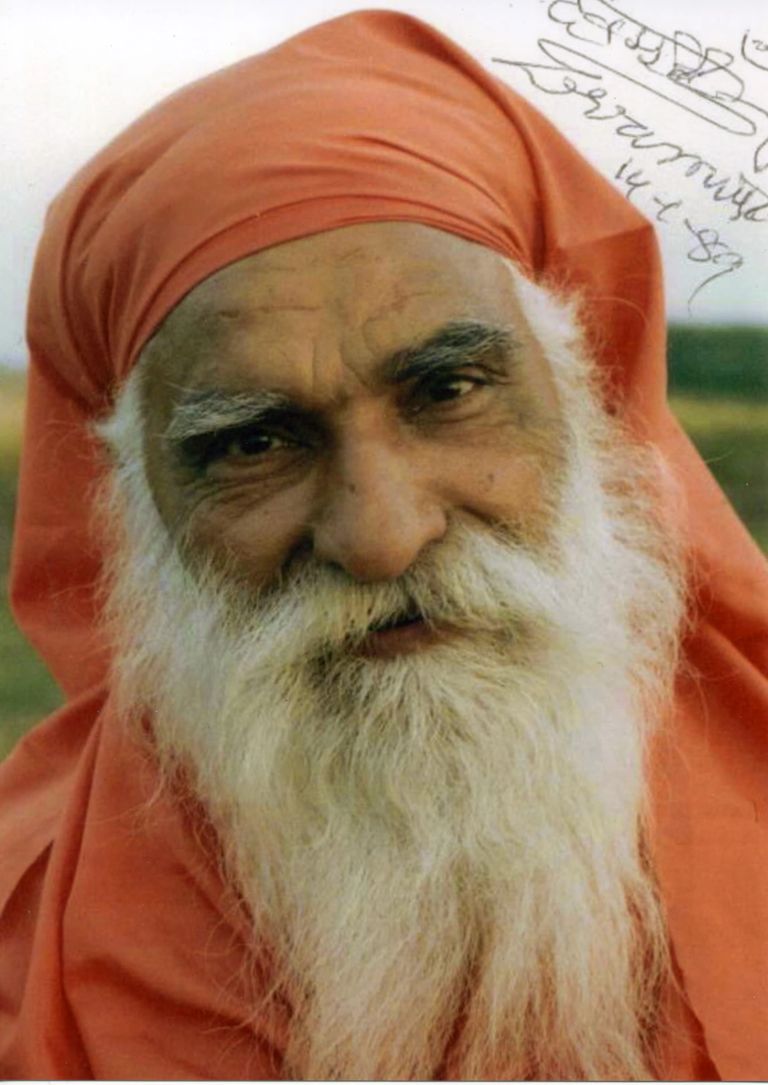 Yoga in Practice for Healthy Body, Mind, and Spirit

(Above photograph by Peter Lovelock

This website is dedicated to (and in memory of) our Teachers, Mr Jack Boulton and Mr John More, and our Grand Master, Shri 1008 Himalayan Yoga Maharishi Swami Dev Murti Ji.  The above photograph was taken in February 1988 in Nadiad, India.

Swami Dev Murti Ji's International Yoga Centre at Highfield in Lenham, Kent, England, was established by Jack & John.  It existed from 1962 to 2015.  The above photograph shows Bhavin in the Training Room where Jack & John and Swami Ji can be seen in the background posters and prints.  Also visible are wooden sandals that are similar to the ones that Swami Ji wore on his Yoga journey from India to Europe.  Swami Ji is the Grandmaster and Grandfather of Modern Yoga.

(Yoga unites the mind, body, and soul in a way that eases tension, reduces inflammation, and promotes health and well being. Regular practice will help you to reach, improve and perfect poses, correct posture and positioning, and improve your breathing and outlook on life.)

(Yoga is a great way to improve your endurance in other physical activities. After a run, or heavy workout, yoga will help your body relax while stretching, strengthening, and lengthening the muscles you were working on.)

(Yoga not only helps improve your body, but also helps with mindfulness and meditation. It is important to take a break from daily life in order to focus on yourself and get clarity. Focusing on your breath during practice is the key to staying in tune with your mind and body.)

They were affectionately known as "Jack & John".

From the 1950s to the 1980s, their Yoga Master, who had walked from India to Europe, teaching along the way, was:

When the context is clear and unambiguous, the above title is shortened to simply "Swami Ji".

Swami Ji had several Yoga Masters but his Spiritual Master was:

When the context is clear and unambiguous, the above title is shortened to simply "Shri 1008".

During the early part of his life, Swami Ji became very famous as a Yoga Master throughout the length and breadth of India.  Consequently, Shri 1008 instructed Swami Ji to teach beyond the boundaries of India.  Swami Ji immediately started on a walking journey from India to Europe, teaching Yoga in many countries.  Swami Ji preferred walking and he intentionally did not use any type of conveyance such as a horse, bicycle, car, train, plane, or ship.

As a result of meeting Swami Ji and learning Yoga, Jack & John bought Schloss Aubach Castle in the Black Mountains area of Germany, which had an affinity with the Himalayan Mountains in India.  This was Swami Ji's Yoga Centre for at least 10 years spanning the 1950s and 1960s.  More details are available from the books in the section "Books about Yoga of Swami Dev Murti Ji".

In 1962 Jack & John bought a house called Highfield in Lenham, England.  This was originally intended to be their home, but they subsequently dedicated it to Swami Ji as an International Yoga Centre.  Every year for over 10 years, we attended weekend or week Yoga Courses at the International Yoga Centre in Lenham, and Jack & John taught us the original, genuine and authentic Yoga that they had learnt from Swami Ji.

The "Seven Golden Keys" of the Yoga of Swami Dev Murti Ji, which are explained in more detail in the books, are as follows:

Swami Ji studied all the different types of Yoga and combined with his additional lifetime research made them into The One Yoga, with the Seven Golden Keys as the essence or "Crown Jewels of Yoga".  The Crocodile Exercises are Swami Ji's unique invention and contribution to Yoga.

Swami Ji spent his whole life in the analysis and refinement of his Yoga.  Swami Ji was a Scientist as well as a Yogi.  Swami Ji had many inventions and many world records.

It has been proven by feedback from Yoga Practitioners that the regular and dedicated practise of Swami Ji's Yoga will result in the reduction (or sometimes even the elimination) of over 80% of diseases and illnesses, whether they are in the body, mind, or spirit.

Swami Ji said to us:

We understand this to mean that the Yoga of Swami Dev Murti Ji will remain forever and forever on the earth, available for practise by anyone, at any time, and at any place.

Here is a short video of Himalayan Yoga Maha Rishi Shri Swami Dev Murti Ji giving a lecture on "Yoga in Practice" in London, United Kingdom.  Thanks to Mr Chandrakant Shukla for the VHS video tape, which I converted to mp4 format.

This is a Yoga Lecture (which starts at 1:51 on the video) given by Shri 1008 Himalayan Yoga Maha Rishi Shri Swami Dev Murti Ji at the Brent Indian Association in London, United Kingdom.  This was originally a TV current affairs programme called "Out and About" on one of the "Zee TV" channels and had been recorded onto VHS cassette tape.  The ownership and rights of Zee TV are fully respected and acknowledged.

This is Shri 1008 Himalayan Yoga Maha Rishi Swami Dev Murti Ji giving a lecture in Hindi to an audience in Rishikesh, India.  A translation into English may be provided in the near future.

The Garabitov Center is in Plovdiv, Bulgaria, and their website is: http://www.garabitov.com/

This video was taken by Svetomil (from Bulgaria), when he visited Swami Dev Murti Ji in India during August 2009.

The Maha Samadhi of Swami Dev Murti Ji was on 27 September 2009.

The Yoga of Swami Dev Murti Ji includes The Seven Golden Keys.  These Keys are described in the Yoga Books which are available on this website.  In his lectures Swami Ji mentions the "Four Minutes", referring to Golden Keys 4 to 7, which can change the world in terms of health, fitness, cleansing, purification, relaxation and peace.  These "Four Minutes" are the Crown Jewels of Yoga and are:

(DON'T TRY THIS AT HOME!!!  We never recommend anyone to try to do Neti Kriya on their own.  Anyone who is genuinely interested in learning Neti Kriya should get authentic professional instruction from a proficient Yoga teacher.)

The Horse Power Exercise is a Very Important Pranayama in Kundalini Yoga.  An excellent description of bandhas in general is provided at:

Good luck with your practice and please feel welcome to contact me with feedback or questions.  Hari Om.  Bhavin "BhavMurti" TheYogaMan.

The Horse Power Exercise is a Very Important Pranayama in Kundalini Yoga.  An excellent description of bandhas in general is provided at:

Good luck with your practice and please feel welcome to contact me with feedback or questions.  Hari Om.  Bhavin "BhavMurti" TheYogaMan.

This is an A4 size printed book of about 27 pages.  This will be ideal for people who prefer a physical book rather than an electronic book.

Please use the Contact Us page to request one or more copies of this printed book.

This is a set of PDF books corresponding to the following titles (which are also available as Kindle Books in the section below):

(This book is also available on other Amazon websites in their local currency.)

(This book is available on other Amazon websites in their local currency.)

A Living Messiah by Jack Boulton and John More

(This book is available on other Amazon websites in their local currency.)

Feel free to contact us with any questions or enquiries, or to request further information about the Yoga of Swami Dev Murti Ji.

This website is maintained by Bhavin Desai, who is an advanced practitioner of Yoga of Swami Dev Murti Ji.  The response time for individual  enquiries may vary depending on factors such as time available, work, holidays, etc.  However, all enquiries will receive a response.  Therefore, please be patient.